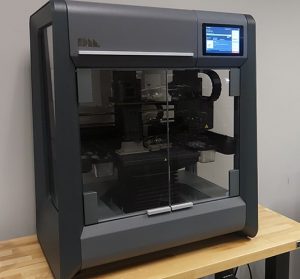 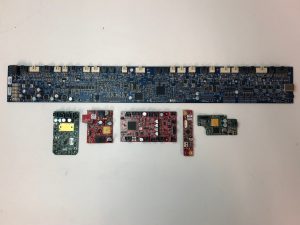 The team at at Microprocessor Designs started working with DesktopMetal in March of 2017 on the design of 3D Studio Printer.    Our tasks included the System Design of the electronic hardware and interconnection as well as all the low level firmware.    Each of the microcontrollers performed tasks subordinate to the Main System Controller, which is a Linux based board.  Circuit board functionality was partitioned to minimize interconnection between assemblies to increase system reliability.     In total the group designed 7 different circuit assemblies (Cooling Controller not shown).  The designs were all based on ARM Cortex M class microcontrollers.  Functions include:

A common source code base was used for the development of the microcontroller firmware for each of the circuit assemblies.  This allowed for quick turnaround since firmware modules were written and tested for one platform but used on many.

The team provided the design and implementation of a robust firmware updater for all the embedded hardware in the field.

As the design solidified, we created manufacturing testers for each circuit assembly that allows a contract manufacturer to deliver tested circuit assemblies to the system integrator to assure an expedient superior assembly process.